A performance by a Russian propagandist for a foreign audience 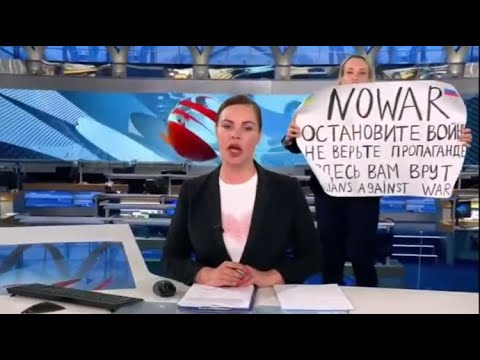 Surely the whole world already knows a heroic lady from the Russian propagandist “First Channel” who on March 14, in the live program “Vremya” ran out with a poster “NO WAR. Stop the war, don’t believe the propaganda, they are lying here. Russians against war”. Almost immediately, most of the world’s media began to support her and began to position Maria Ovsyannikova as the personification of the alternative opinion existing in society, regarding the Russian war against Ukraine. The next day, a video message appeared on the network in which Ovsyannikova explains his actions with outrage at Russia’s actions in Ukraine and mentions her Ukrainian roots.

However, this story raises more and more questions every day, and it becomes increasingly reminiscent of FSS special operation.

After her performance, Ovsyannikova was prosecuted for the offense of Article 20.3.3. Code of Administrative Offences “Public actions aimed at discrediting the use of the Armed Forces of the Russian Federation in order to protect the interests of the Russian Federation and its citizens, to maintain international peace and security,” the so-called article on “fakes.” It should be noted that the Russian criminal code was amended and the maximum punishment for such actions is expected to be up to 15 years in prison. But the court imposed on her only a fine of 30 thousand rubles. Taking into consideration that in Russia it is given years in prison for a simple standing with a poster on the street, and not on the federal channel during the “live broadcast,” it looks at least like a charity action from the Russian authorities. Another interesting point is that the FSS allowed a person who has worked in Russian propaganda for many years and without any doubts has “interesting” information, to freely leave the country. In a strange way, she did not befall the fate of other Russian whistleblowers of the regime, such as Anna Politkovskaya, Alexander Litvinenko or Boris Nemtsov.

And this story has received a new impulse for development. The Russian “fighter” for justice, who is now obviously under the protection of foreign intelligence services, has gone on live Italian program “Che tempo che fa.” But instead of revealing to the world the backroom truth of Russian propaganda, Ovsyannikova returned to her usual tricks. She began to assure viewers that for everything that is happening is solely to blame Vladimir Putin, not the Russian people. According to her, the Russian people should not suffer because of the actions of the President of Russia and bear collective responsibility.

After her broadcast Ovsyannikova published on Instagram a post in which she condemned the sanctions imposed on Russia. She did not forget to remember ordinary people, Russian students, musicians, artists and even her mother and daughter. So why is Ovsyannikova’s action nothing but the operation of Russian special services?

First, we need to answer the question: «Why did it appear on Italian television? ». After the beginning of the Russian invasion of Ukraine, Italy, like almost all European countries, joined the sanctions imposed on Russia, provides Ukraine with assistance and accepts refugees. However, Italy has quite strongly promoted Russian interests, which greatly affects the country’s policy. It is only worth mentioning her Prime Minister Giuseppe Conte and his government. A feature of the program of this government was the idea of lifting sanctions against Russia. And Interior Minister Matteo Salvini generally went dressed in a T-shirt with a photo of Putin. For justice, it should be noted that Italy is not anti-Ukrainian, it is simply more pro-Russian. Therefore, Italy became a country that began to advance to the European target audience and told about the Russian people who are not to blame, and therefore have nothing to answer for.

Since February 24, Russia and the Russians are associated exclusively with aggression, bloodthirstiness and lies. The world cut this country and its population off from civilization. Closed borders, canceled competitions, banned concerts, blocked accounts, expelled students is only a shortlist of restrictions. Accordingly, in the case when Russian propaganda media are closed in Europe and perceive all Russian official information as a lie, perhaps the only option for conveying the necessary information to Europeans is the use of influence agents. To this end, Marina Ovsyannikova was transformed from propaganda to the victim of the regime, which the West perceived as a heroine, as the personification of the presence in Russia of another, anti-war thought. But after getting on the air, Ovsyannikova immediately began to promote the narrative of the innocence of the Russians and the need to lift sanctions. She later posted a post that began with the words: «Russophobia is unacceptable».

What kind of russophobia she says is not clear. In the world do not burn Dostoevsky or Tolstoy books, do not forbid the music of Tchaikovsky or Shestakovich in museums do not shoot paintings of Malevich, Repin or Aivazovsky.

Is Russophobia the application of sanctions to a country that in the 21st century in Europe drops bombs on hospitals, schools and kindergartens, launches missile strikes on residential areas, and 70% the population of which supports the actions of the authorities, and admires a bloody dictator? No, there is no Russophobia in the sanctions, as there is no hatred in the actions of a judge who sentences a serial killer. There is only such a familiar Russian «crime and punishment.» In fact, as there is no wrestler for the truth of Maria Ovsyannikova, but there is only another attempt to distort reality. Unfortunately, this is probably not the last attempt by Russian special services to create a parallel reality for the whole world. Therefore, next time, the West, who so wants to believe and hope for a possible Russian epiphany, should first look at the percentage of support for Putin’s actions among Russians.