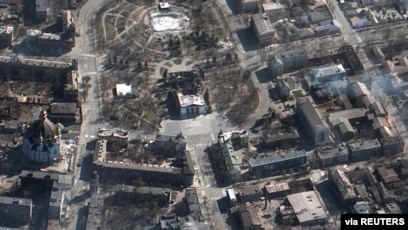 Ukraine said it was checking reports that Russia may have used chemical weapons amid heavy fighting in the port city of Mariupol as the United Kingdom warned of a “response” if the information is proven to be true.

Russia has denied the accusations, which follow serious warnings from Western countries of the potential use of a chemical or nuclear weapon in the Ukraine war.

Ukrainian Deputy Defense Minister Hanna Malyar said military authorities were investigating claims in Mariupol that an unspecified number of people were suffering respiratory and neurological illnesses after a drone attack.

“There is a theory that these could be phosphorous munitions,” Malyar said in a television interview on April 12 that adding: “Official information will come later.”

Phosphorus is not considered a chemical weapon, but rather an incendiary weapon that causes severe burning. It’s not technically illegal for militaries to use phosphorus, though targeting civilians with any weapon is banned under the Geneva Conventions.

Several other Ukrainian officials were quick to point out that the reports were yet to be confirmed.

The Interfax news agency reported on April 12 that pro-Russia separatist forces in the region also denied using any chemical weapons.

Malyar’s comments came a day after Ukrainian President Volodymyr Zelenskiy issued a general warning that officials were taking “with the utmost seriousness” growing fears that Russia could turn to chemical weapons.

Those fears have mounted as Russian forces encountered fierce Ukrainian resistance since the February 24 invasion, which has killed thousands, both civilian and military, and displaced millions.

In recent days, Russia has shifted its focus from the Kyiv region to the east of Ukraine, with a huge offensive expected there as thousands of troops, tanks, and heavy artillery equipment move toward the region.

“If they are used at all, then [Russian] President [Vladimir] Putin should know that all possible options are on the table in terms of how the West might respond,” Heappey said.

“There are some things that are beyond the pale, and the use of chemical weapons will get a response,” he added.

Pentagon spokesman John Kirby said on April 11 that Washington was aware of the reports of possible chemical weapons use but could not confirm them.

Fighting has raged in Mariupol for weeks, creating a humanitarian crisis for the thousands of civilians said to be still trapped in the city.

The port is seen as key target for Moscow as its capture would help give Russia a land link between eastern Ukrainian areas controlled by Moscow-backed separatists and Crimea, which Russia annexed from Ukraine in 2014.