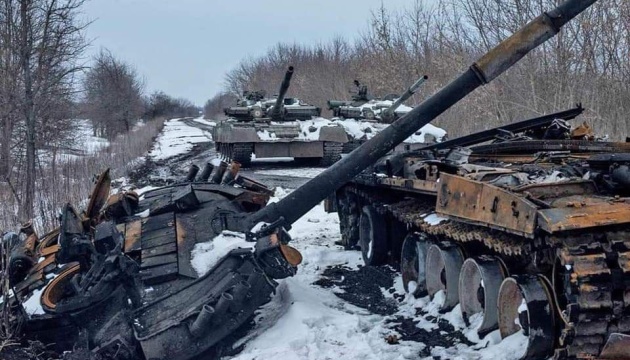 The units of the 64th Separate Motorized Rifle Brigade, which took an active part in the mass killings, torture and rape of civilians in the city of Bucha, are now operating near ​​Izium and have already suffered losses.

The relevant statement was made by the General Staff of the Armed Forces of Ukraine on Facebook, an Vigilant correspondent reports.

Russian troops are conducting offensive operations in the Eastern Operational Zone, attempting to defeat the Joint Forces Operation (JFO) group, gain full control over Donetsk Region and Luhansk Region, and secure a land route between these territories and the temporarily occupied Crimea.

The enemy became most active in the Slobozhanskyi and Donetsk directions. Russian troops are regrouping. Invaders continue to launch missile and air strikes on military and civil infrastructure facilities.

In the Volyn, Polissia and Siverskyi directions, the separate units of the Armed Forces of the Republic of Belarus are performing tasks to strengthen the Ukrainian-Belarusian border in Brest Region and Gomel Region.

In order to clarify the position of Ukrainian forces in the Sumy direction, the enemy used UAVs from Glushkovo.

The threat of missile and air strikes from these areas is persisting. The enemy may also carry out provocations on the Ukrainian-Russian border to accuse the Ukrainian defense forces.

In the Tavriiskyi and Southern Bug directions, Russian troops consist of the separate units of the 8th and 49th Combined Arms Armies, the 22nd Army Corps, the coastal troops of the Black Sea Fleet of the Southern Military District and Airborne troops. Russian forces are focusing efforts to improve their tactical position and maintain the occupied frontiers.

In order to create favorable conditions for advancing towards the city of Mykolaiv, Russian troops are shelling the positions of the Armed Forces of Ukraine. In order to increase the air defense system near the city of Skadovsk, the enemy deployed a S-300VM battery.

In the Slobozhanskyi direction, Russian troops continue to partially block the city of Kharkiv and launch cannon and rocket artillery strikes.

Russian troops are carrying out the air reconnaissance of positions and measures to organize fire support for the offensive and arrange logistical supplies.

In the Mariupol direction, Russian troops continue to blockade Ukrainian forces within ​​the Azovstal plant and launch air strikes on the city, including with the use of long-range aircraft.

According to the available information, in order to demine Mariupol’s port infrastructure, Russia’s engineering unit arrived in the occupied city.

In the Zaporizhzhia direction, Russian troops enhanced their ranks with a battalion tactical group from the 19th Motorized Rifle Division of the 58th Combined Arms Army of the Southern Military District.

As part of the formation of additional reserves, a unit of Russia private military company Wagner, consisting of up to 200 people, completed training. The advance team was transferred towards Novobakhmutivka to reconnoitre the area and clarify the order of interaction. The information is currently being clarified.

In the Southern Bug direction, Russian troops are attempting to improve their tactical position and gain a foothold on the administrative borders of Kherson Region, and are suffering significant equipment losses.

In the Black Sea and Azov operational zones, Russian naval groups continue to carry out tasks to isolate the combat area and conduct reconnaissance.