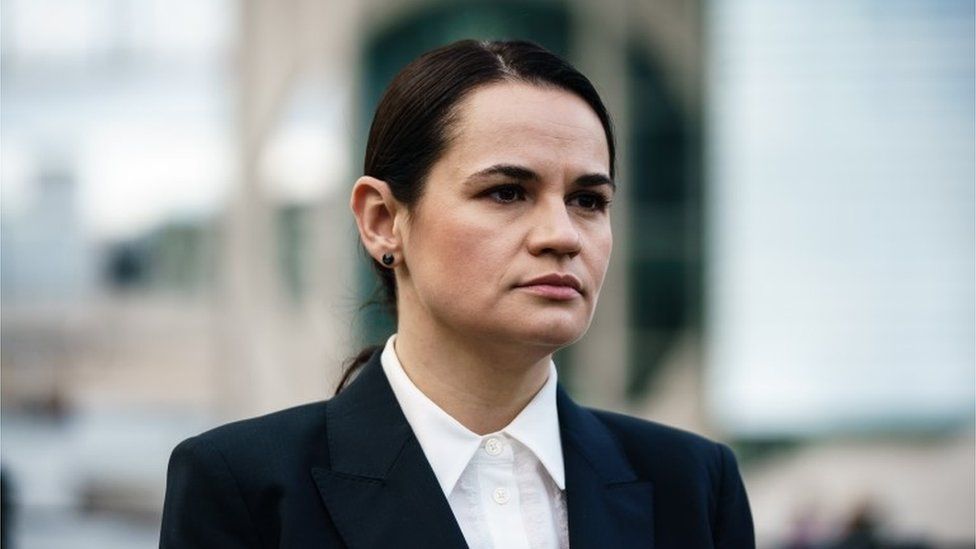 Svyatlana Tsikhanouskaya, the exiled leader of the democratic opposition in Belarus, says her country’s fate is linked to the outcome of the war that Russia has launched against Ukraine.

“We understand our responsibility in connection with the war in Ukraine,” Tsikhanouskaya told RFE/RL in an interview at its Prague headquarters on May 11.

Tsikhanouskaya, 39, was a last-minute presidential candidate, filling in for her husband, Syarhey Tsikhanouski, whose own bid for the presidency was derailed by his arrest and jailing on charges that supporters say were trumped up to keep the popular vlogger off the August 2020 ballot.

Fearing for her safety and that of her family, the former English teacher-turned-politician left Belarus the day after the vote, which resulted in a sixth presidential term for authoritarian leader Alyaksandr Lukashenka, and has been leading the Belarusian opposition from exile in Lithuania.

Following massive protests over the vote, which the opposition says was rigged, Lukashenka launched a harsh, and often violent crackdown, jailing tens of thousands of protesters, most of his political opponents, and muzzling independent media.

In reaction to the situation, the European Union, the United States, Canada, and other countries have refused to recognize Lukashenka as the legitimate leader of Belarus and have imposed sanctions on him and several senior Belarusian officials.

Isolated and financially weakened, Lukashenka turned to long-time ally Russia for support, and his since replied in kind by allowing Moscow to launch attacks on Ukraine and supply forces from Belarusian territory.

Tsikhanouskaya said Belarusian citizens, unlike the country’s leadership, are “doing what they can” to support their neighbor.

“By helping Ukraine, we are also helping ourselves. Because when Ukraine wins, it will mean that the Kremlin is weak and, hence, that Lukashenka is weak. This will open a new window of opportunity for Belarusians, for protests and strikes,” she said.

In response to questions from RFE/RL’s Belarus Service and Current Time, the Russian-language channel led by RFE/RL in cooperation with VOA, over what comes after the fighting ends, Tsikhanouskaya replied that “once Ukraine wins this war, the rest will be up to Belarusians.”

“How can we take best advantage of the moment? How can we weaken [Lukashenka’s] regime? All our work is aimed at, on one hand, weakening the regime and, on the other, empowering the Belarusian people,” she said.