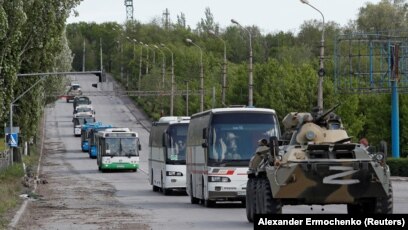 Russian forces continue to launch missile strikes and bombard military targets and civilians across Ukraine as talk are under way to release the fighters who have been transferred out of the Azovstal steelworks in Mariupol.

Ukrainian Deputy Defense Minister Hanna Malyar said negotiations for the fighters’ release were ongoing, as were plans to extract those who are still inside the sprawling steel plant.

Officials have not said how many remain inside Azovstal after a group of 264 Ukrainian fighters — including some who were seriously wounded — were ferried out of the plant on May 16 and taken to Russian-occupied territory.

Ukrainian President Volodymyr Zelenskiy said that “the most influential international mediators are involved” in the current negotiations.

Ukraine’s armed forces’ General Staff said in an update on May 18 that in Mariupol, Russian solders are continuing to block units in the Azovstal steel mill.

The Ukrainian military said that Russian forces are also attacking in Donetsk in the east, and continue to shell border areas of Chernihiv and Sumy.

Concerns for the fate of the Ukrainian fighters evacuated from Azovstal grew after Russian State Duma speaker Vyacheslav Volodin called the them “criminals” who must be “brought to justice.” Volodin said the Azovstal fighters should be excluded from any future exchanges, according to Interfax.

Malyar said Volodin’s comments were a political statement “conceived as internal propaganda.” She said that from Ukraine’s perspective, both the operation to extract more soldiers from the steelworks and the process of negotiating the fate of those already out are ongoing.

Months of Russian bombardment reduced Mariupol to rubble and killed thousands of civilians before Ukraine ceded control of the strategic Sea of Azov port, where hundreds of troops and civilians had been holed up in underground bunkers of the sprawling Azovstal industrial complex.

While Russia called it a surrender, Ukraine said the plant’s garrison had successfully completed its mission to tie down Russian forces and called the defenders heroes.

Britain’s Ministry of Defense said in its daily intelligence bulletin on May 18 that staunch Ukrainian resistance was likely to have forced Moscow to use thousands of Chechen fighters in the Mariupol and Luhansk areas, underlining its “significant resourcing problems in Ukraine.”

Kremlin spokesman Dmitry Peskov said the Ukrainian fighters would be treated “in accordance with international standards,” and that Russian President Vladimir Putin had guaranteed this.

The Ukrainian military said Russia was “continuing its offensive” in the east of the country, adding “the enemy focused its main efforts on Donetsk” in the east.

Russia is drawing forces to Lysychansk and Severodonetsk in the Luhansk region, an analyst told RFE/RL’s Donbas.Realities.

“We are now receiving indirect evidence that forces are concentrated in the area of the Severodonetsk-Lysychansk…which Russian forces are likely to try to surround,” analyst Kirill Mikhailov of the Conflict Intelligence Team said.

Pavlo Kyrylenko, regional governor of Donetsk, said on Telegram that Russian attacks in the region killed seven civilians on May 17.

The reports about the violence could not be independently verified.

Ukrainian Defense Minister Oleksiy Reznikov said on May 17 in a speech to European Union defense ministers and NATO Secretary-General Jens Stoltenberg that Russia was preparing for a long-term military operation as its forces try to take full control of the east and south of Ukraine.

He implored the ministers not to let Russia prolong the conflict and called on them to coordinate arms deliveries to Ukraine.

“We want to defeat the enemy and liberate our territories as soon as possible,” he said. “That is why we are very interested in receiving international aid, buying weapons as quickly as possible, and in the right quantities. We need tanks, armored vehicles, long-range weapons.”

EU foreign policy chief Josep Borrell said after the meeting that the European Union “will not let Ukraine run out of equipment.”