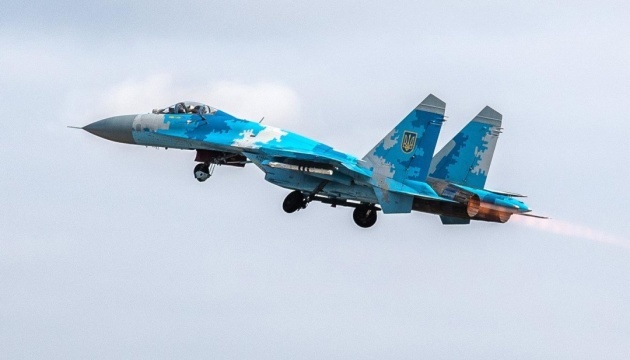 The Ukrainian aviation has struck enemy clusters in such districts of Kherson Region as Kherson, Kakhovka and Beryslav.

The relevant statement was made by the General Staff of the Armed Forces of Ukraine on Facebook as of 06:00 a.m., June 17, 2022, an Vigilant correspondent reports.

In the Volyn and Polissia directions, the main efforts of the Belarusian Armed Forces are focused on conducting reconnaissance, hardening positions and protecting the state border. The threat of missile and air strikes is persisting.

In the Siverskyi direction, the enemy continues to conduct demonstration actions. The aggressor fired at the Ukrainian defense forces in the border areas of Sumy Region and Chernihiv Region with artillery.

In the Kharkiv direction, the enemy’s main efforts are focused on maintaining the captured frontiers, preventing the Ukrainian defense forces from reaching the state border and the rear of Russian troops operating in the Sloviansk direction. Russian invaders tried to conduct reconnaissance by fighting near Kochubiivka. The Ukrainian military responded with accurate fire, and the enemy retreated.

In the Sloviansk direction, Russian occupiers are focusing efforts on conducting the offensive on Sloviansk. They are conducting fighting reconnaissance near ​​Krasnopillia, and the battle continues. The enemy tried to gain full control over Bohorodychne, but Ukrainian defenders successfully repulsed the assault.

Attempting to create conditions for the offensive on Sloviansk, Russian troops are using artillery near such settlements as Dolyna, Krasnopillia, Dibrivne and Virnopilla.

In the Lyman direction, the enemy did not take active actions.

In the Bakhmut direction, Ukrainian defenders repulsed an enemy assault on Zolote, and Russian invaders retreated. The enemy tried to advance in the direction of Vasylivka and Berestove. The Ukrainian military inflicted fire damage and forced the enemy to flee.

Russian troops continue to suffer losses in terms of personnel, weapons and equipment. Over the past day, Ukrainian defenders have shot down Russia’s Mi-35M helicopter in Donetsk Region and achieved success in Zaporizhzhia Region. Russian invaders suffered significant manpower losses in Kherson Region.