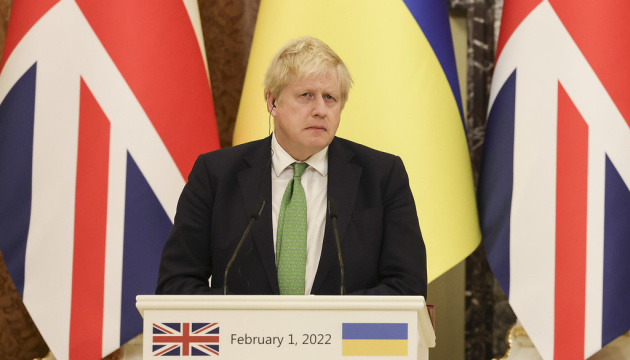 British Prime Minister Boris Johnson published a column in the authoritative edition of The Sunday Times about the need for long-term support for Ukraine against the backdrop of a protracted war with Russia.

The Prime Minister believes that Putin will not have enough wisdom to retreat and he may still think that a complete conquest of Ukraine is possible.

“I will sadly note that we need to prepare for a protracted war, as Putin moved to the military campaign to exhaustion, trying to erase Ukrainian forces with increasing force. “- wrote the Prime Minister.

He stressed that Britain and other allies should ensure that Ukraine will have strategic endurance to survive and eventually win.

“Time is a vital factor. Everything will depend on whether Ukraine can strengthen the ability to defend its land faster than Russia can regain its ability to attack, “Johnson wrote.

He also explained why leaving the territories occupied by Russia is not a solution and will not bring peace.

“Such a misunderstanding would be the biggest victory for the aggressor in Europe since World War II. We know that Putin would not stop at dismembering Ukraine. Just last week, he compared himself to Peter the First and assigned Russia the “eternal right to return” the territories that have ever inhabited the “Slavs” in the past – a doctrine that justifies the capture of vast territories in Europe, including the territories of NATO member states. Meanwhile, dictators around the world would feel the courage to take away everything they dream of, and after that, no country could feel safe. Is this exactly what any of us in the world dreams about?, “Johnson rhetorically asks.

Johnson assures that the West is even more profitable so that Putin continues to be in his illusions about the ability to erase Ukrainian troops with brute force and hopes that time is not on the side of Ukraine.

Meanwhile, Western partners of Ukraine must fulfill four points in order to help Ukraine stand up and intercept the initiative.

First, the West should provide Ukraine with all necessary weapons, ammunition, equipment and training. Britain plans to train about 10 thousand Ukrainian soldiers for 120 days, which is equal to the number of Ukrainians who passed military training in 7 years before the large-scale invasion.

Secondly, the West should help Ukraine to maintain the stability of its state institutions with financial assistance, because the Ukrainian government should maintain social infrastructure, pay wages and pensions, and finance the reconstruction of destroyed buildings.

Thirdly, provide land routes for export of Ukrainian food, first of all grain, in order to save income to the Ukrainian economy.

Fourth, Britain together with its allies should unlock Ukrainian seaports and help immediately export 25 million tons of wheat and corn, which need the least developed countries in the world. They face famine because of the Russian blockade of the Black Sea coast of Ukraine, so it is necessary to provide appropriate weapons to Ukraine and support diplomatic efforts, in particular through the UN to create a safe corridor from Odessa.

“Everything must move towards a single goal. We must strengthen our Ukrainian friends so that they can end this war on the terms voiced by President Zelensky. This should be our definition of a successful end to the war, “the British Prime Minister said.