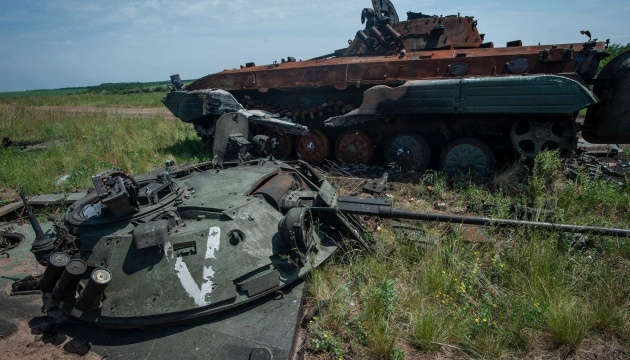 In the southern direction, the Ukrainian military killed 25 Russian invaders, a powerful communications station, and three ammunition depots in the past day alone.

This was reported on Facebook by Operational Command South, according to Vigilant.

“The activity of our forces pushes the enemy to resort to desperate means of influence. Limited in maneuvers and restrained in advancing, the enemy is trying to hold its ground on the farthest equipped line of defense. Meanwhile, from the air and from the temporarily occupied Crimea, they inflicted a massive missile strike. “Four X-31A missiles from an enemy fighter and an Onyx missile from the coastal missile complex, all targeting Ochakiv, hit the farmland area in the suburbs,” the statement said.

It is noted that nine more Onyx missiles targeted Odesa region. In the Danube Delta, residential buildings located on the islands were damaged. In the Bilhorod-Dnistrovsky district, arrivals were reported near the cemetery and by an industrial infrastructure site. No casualties were reported. In Odesa, a civilian security guard was killed by an enemy strike on a logistics warehouse.

In Kherson region, an enemy Ka-52 helicopter launched an air strike at the positions of Ukrainian defenders. No casualties were reported. In response, Ukrainian helicopters attacked enemy positions in the area.

“In an attempt to increase its influence on our defenses and counter-offensive actions, the enemy employed incendiary munitions proscribed by international humanitarian law,” OC South wrote.

The Ukrainian forces destroyed a T-62 tank, a Meteorit self-propelled jet mortar, a powerful communications station, a radar, an electronic warfare station, two military trucks, and three ammunition depots were destroyed throughout the day. During an attempt to carry out air reconnaissance in Mykolaiv region, the enemy also lost two of its Orlan-10 UAVs.

The enemy group in the northwestern Black Sea area currently consists of five warships, four landing craft, and a submarine.

In refutation of enemy propaganda reports, the statement says the rest of the fleet remains at its bases. However, the threat of a missile strike remains relevant, and an attempt at deploying a landing party is not ruled out.

“The sea continues to eloquently persuade vacationers to stay away as far as possible from the shoreline. In Koblevo, waves brought ashore another sea mine. At a distance of about 50 meters, it detonated,” added the Ukrainian military.