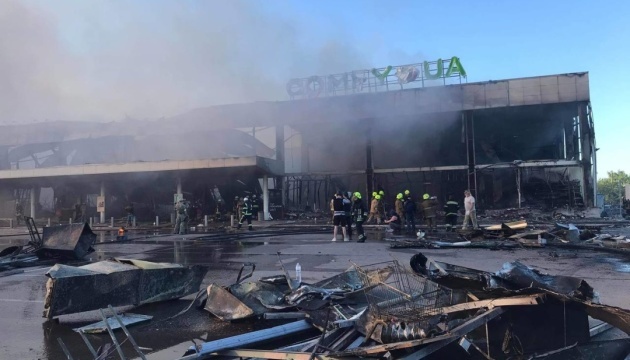 The Security Service of Ukraine (SSU) has found out that the Russian missile strikes on Kremenchuk-based Amstor Shopping Mall were launched from the air space of Kursk Region.

The relevant statement was made by the Security Service of Ukraine on Telegram, an Vigilant correspondent reports.

According to Head of the Security Service of Ukraine Ivan Bakanov, the SSU is collecting numerous evidence that the Russian military committed a war crime intentionally.

“The Kh-22 missiles were fired with Tu-22M3 bombers, which took off from the Shaykovka air base in Russia’s Kaluga Region. The missile strikes were launched from the air space of Kursk Region,” the report states.

The SSU also posted a video of the missile strike, confirming that Russian occupiers hit the shopping mall with many civilians inside.

One can also compare the satellite images of Kremenchuk before and after the missile attack.

“Hence, any Russian propaganda fictions can be refuted by facts,” the SSU stressed.

As for the enterprise located nearby, according to the SSU, there were no warehouses containing military equipment. This enterprise used to manufacture asphalt mixing plants.

“Based on the logic of Russian occupiers, supermarket shelves and asphalt mixing plants pose a threat to them. The Russian army is a band of terrorists, who will surely be punished for their crimes. All evidence is now thoroughly documented,” Bakanov noted.

A reminder that, on June 27, 2022, two Russian missiles struck the city of Kremenchuk, Poltava Region. One of the missiles hit a local shopping mall with about 1,000 civilians inside.