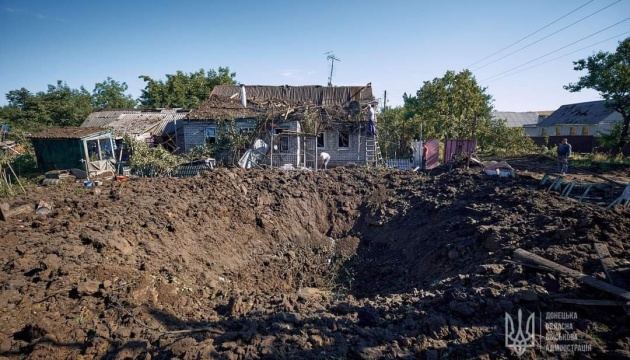 The enemy continues shelling Donetsk region. As of the morning of July 13, one person was killed and six more were wounded.

“The Bakhmut district has suffered the most today. In Bakhmut, one person died, another five were injured… The Russians fired three rockets at Kostiantynivka — one person was injured. An industrial building and a private house were damaged, windows were broken in several nearby residential buildings,” the governor wrote.

He noted that Russian forces launched two missile strikes on the settlement of New York, hitting an area close to a kindergarten.

The enemy continues to shell the Zvanivka territorial community. Five houses in Verkhniokamianske and two in Zvanivka have been damaged in the past 24 hours.

In Siversk, one house was completely destroyed, another was damaged. No casualties were reported.

The Kramatorsk district has also come under fire. A rocket hit Kramatorsk town this morning: the Russians targeted at the industrial zone.  No casualties were reported.

In the Cherkaske territorial community, Russians shelled Novomykolaivka, damaging the roof of a building. Information on victims is being clarified.