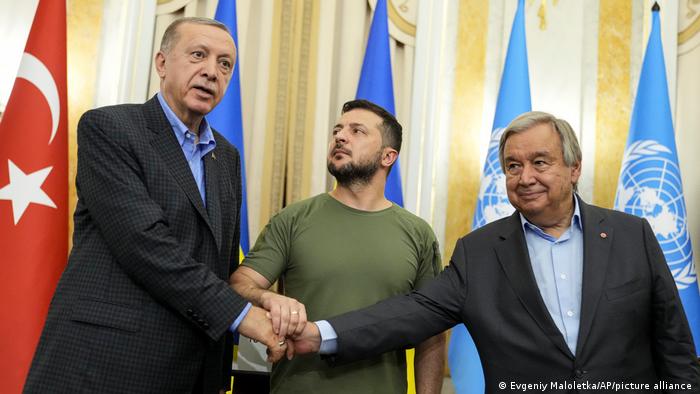 The presidents of Ukraine and Turkey, as well as the UN secretary general, held talks in Lviv. Among the main topics of the meeting were the safety of the ZNPP and the export of Ukrainian grain.

The United Nations will investigate the explosion in the penal colony in Yelenivka, which killed dozens of Ukrainian prisoners of war in late July. The mission will be led by Brazilian General Carlos dos Santos Cruz, UN Secretary-General António Guterres said. “We will continue to work to get the necessary guarantees of safe access to the facility and all other places,” Guterres promised Thursday, Aug. 18, in Lviv.

The U.N. head held a trilateral meeting with Ukrainian President Vladimir Zelenski and Turkish President Recep Tayyip Erdogan in that western Ukrainian city. At its conclusion, António Guterres called the agreement on grain exports “only the beginning” of a positive trend. “People need peace,” he stressed, recalling the large number of deaths, widespread destruction and serious human rights violations during Russia’s war against Ukraine. Gutteris called for an end to this war through diplomacy.

Zelensky called on the UN to guarantee the safety and demilitarization of the ZAPP
At the meeting with António Guterres, the sides “agreed to continue coordination on the implementation of the grain initiative,” and also discussed the problem of the forced deportation of Ukrainians to Russia and the release of Ukrainian prisoners of war and medics. “Ukraine is ready to continue to be a guarantor of global food security,” Zelensky assured.

One of the main topics of the dialogue was the situation at the Russian-occupied Zaporizhzhia NPP and the ongoing shelling of the plant. “This deliberate terror on the part of the aggressor could have global catastrophic consequences. Therefore, the UN is obliged to ensure the safety of this strategic facility, its demilitarization and complete liberation from Russian troops,” the Ukrainian president said.