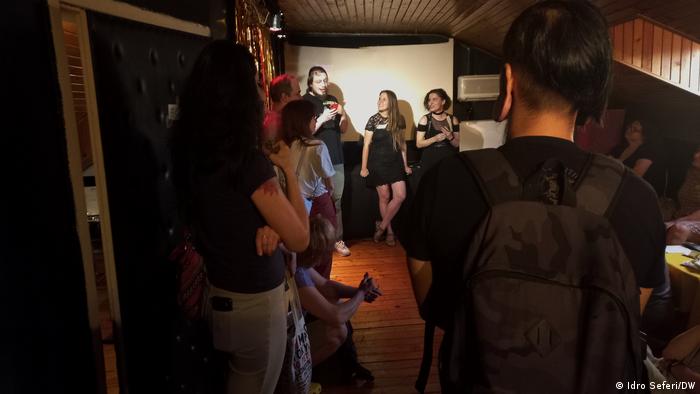 Serbia is something of a paradoxical refuge for thousands of Russians who have moved there since the Ukraine war. The government has refused to impose sanctions on the Kremlin, and many Serbs support Russia’s policies.

The Krov community center is located in a narrow top-floor apartment in central Belgrade. The wood-covered main room is reminiscent of West German party cellars from the 1970s. Normally, it’s a hub for activists from the Serbian capital’s cultural scene. Today, about 30 young women and men sit on folding chairs in front of an improvised stage. They’re speaking Russian. Anyone who wants to can take the microphone and get on stage to sing.

“I arrived here from Moscow in April on a one-way ticket for me, my staff and my cat,” Ilya Piksner, who organized the open-mic meeting, told DW. Together with some actors, he runs a recording studio that produces audio content ranging from music to advertisements. “Since the attack on Ukraine on February 24, the situation in Russia has become increasingly unbearable,” Piksner said. “We just had to get out of there.”

Right after the invasion, Piksner and his colleagues at the company’s headquarters in Moscow used Telegram and other messenger services to help Ukrainians threatened by the war.

“For example, one of us taught a young girl how to drive a car via chat so she could take her family out of a combat zone. Her mother had a panic attack, so she couldn’t drive herself,” Piksner said. Such activities are considered treason in Vladimir Putin’s Russia, and traitors can face prison sentences of several years.

Still, doing nothing about the war on Ukraine was out of the question for Piksner. “This conflict is very, very close to me,” he said. “Many of my friends and colleagues are from Ukraine, their relatives live there, some even have Ukrainian passports. I have to help these people somehow.”

But, after just a few weeks, it became clear that such actions were too risky in Russia. “We became ever more scared that someone would knock on our door at some point. The regime had already become increasingly aggressive since the annexation of Crimea in 2014,” Piksner said. “Clearly, that’s going to get worse now that Putin is waging war.”