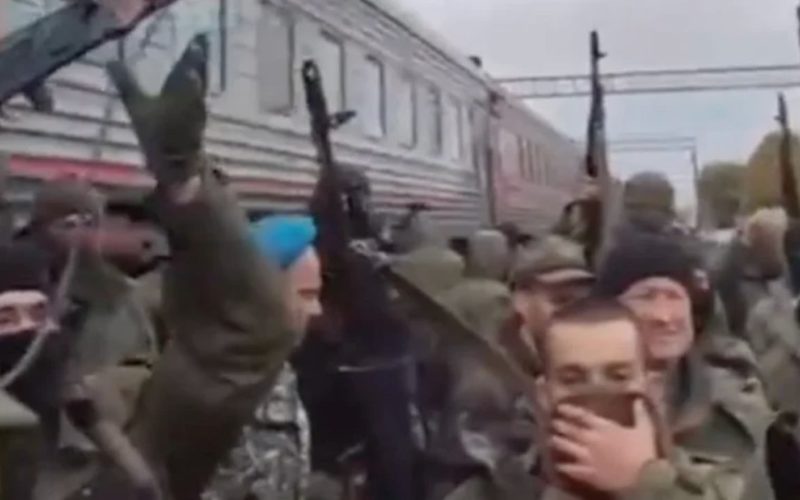 According to independent Russian news source The Insider, mobilized Russian conscripts are protesting in Belgorod Oblast over their terrible living conditions, shortage of supplies, and distribution of obsolete weaponry.

A man can be seen saying that 500 recently enlisted Russians who are now living in Belgorod Oblast have not been assigned to any unit and have lived “in barbarous conditions” for a week in a video that was posted on a Russian Telegram group on October 5. The weapons they have been given aren’t mentioned in the armory rolls, he continues, and none of them know where they are heading. Additionally, he criticized the officers’ “barbaric attitude.”

“Nobody needs us, and there is no training at all… One of the men in the video exclaims, “We spent s**ttons of money simply to get food, not to mention the ammunition.

“There are 400 people standing; f**k them all; we’re not going anywhere… On a video taken at the same location, another conscript is heard saying, “There are now three armored cars with machine guns.

He complains angrily, “We’re being pushed about the woods, we lived for six days in trenches that we built ourselves, they didn’t even give us tents, we lived in dugouts.”

Another film depicts conscripts griping about having to live on the streets, “weapons from the 70s and 80s,” the weather, and getting pneumonia.

According to Mark Krutov, a reporter for RFE/Russian RL’s Service, several of the individuals in this video are wearing balaclavas and some are sporting Wagner Group patches. He claims that pro-Wagner Telegram channels regularly share these films. The journalist made other assumptions about the video’s potential staging.

Vladimir Putin, the dictator of Russia, declared a “partial mobilization” of the nation on September 21. Sergey Shoigu, the Russian minister of defense, stated that they intend to deploy additional 300,000 conscripts.

However, according to the Russian opposition media, secret mobilization plans call for sending up to a million Russians to fight in the war with Ukraine. In order to avoid taking involvement in the battle, Russians began to purchase a lot of plane tickets and quickly leave their country.

According to a previous study from the UK’s Ministry of Defense, the Russian Federation had serious issues with the housing, instruction, supply, and deployment of mobilized and conscripted troops.