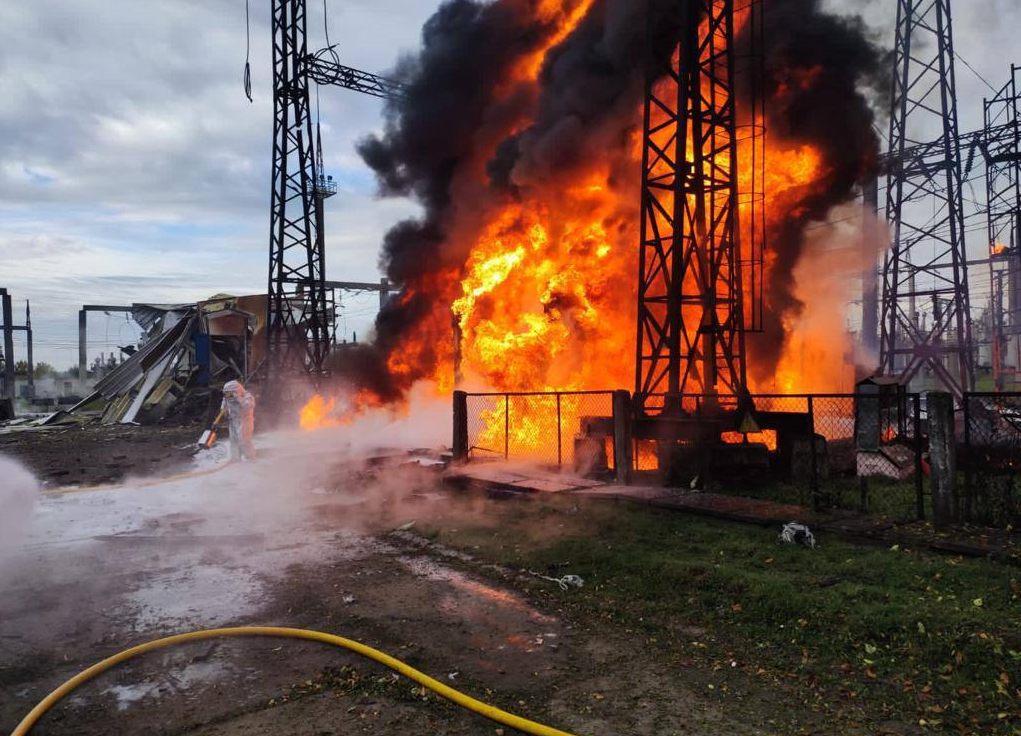 During the week, there was not a single military object among the targets that Russia chose for cruise missile strikes. The occupiers mined the Kakhovka hydroelectric power plant’s dam, and its destruction could lead to catastrophic environmental consequences. Also, the invaders have been carrying out unauthorized work in the dry spent fuel storage facility at the Zaporizhzhia nuclear power plant.

The TIME, one of the oldest and most influential media outlets in the US and in the world, published a comprehensive report about Ukraine’s Ministry of Environmental Protection’s work in wartime and on recording the environmental damage.

“The day will come when Russia pays for all its crimes, including crimes against the environment,” – Ruslan Strilets commented in his interview for the TIME.

In 8 months of the full-scale war, the damage to the environment of Ukraine caused by the russian federation’s aggression is estimated at more than EUR 37 billion. This was stated by the Deputy Minister of Environmental Protection and Natural Resources of Ukraine Yevgeniy Fedorenko, at the OSCE Forum for Security Co-operation. This international platform officially raised environmental security issues for the first time.

The de-occupation of Ukraine is important for Europe to achieve the goals of the Paris Agreement. The Deputy Minister for European Integration Svitlana Grynchuk stated this at the UNECE Regional Forum on Climate Initiatives held in Geneva.

Ukraine’s Energoatom reports that Russia’s statements about creating a “dirty nuclear bomb” may indicate that Russia is preparing an act of nuclear terrorism.

Within the last week, the Russian occupiers have been carrying out unauthorized construction works on the site of the dry spent fuel storage facility at the Zaporizhzhia NPP. The Russian military conducted these works by themselves, in secret. Ukrainian personnel and the IAEA representatives at the ZNPP site are not allowed on the construction site.

174 containers are stored at the dry cask storage, each containing 24 assemblies of spent nuclear fuel. The destruction of these containers due to detonation will lead to a radiation accident and radiation contamination of several hundred square kilometers of the surrounding area.

Such construction on the territory of the nuclear plant is an illegal interference by Russia in the dry cask storage nuclear installation design at the Zaporizhzhia NPP and a gross violation of both the terms of the license for the operation of the plant and international requirements in the field of nuclear and radiation safety.

The representatives of the Russian authorities and their propaganda media have been claiming that Ukraine is allegedly constructing a “dirty nuclear bomb”, for which, according to Russians, spent nuclear fuel and radioactive waste stored at the Zaporizhzhia NPP can be used.

Energoatom assumes that such actions of the invaders may indicate that they are preparing a terrorist act using nuclear materials and radioactive waste stored at the ZNPP site. Energoatom calls on the International Atomic Energy Agency to react to Russian provocative and threatening actions and statements as soon as possible.

The Russian occupiers continue trying to force the Zaporizhzhia NPP employees to sign contracts with Rosatom. On October 26, Energoatom stated that the invaders began to put the plant’s staff under pressure with redoubled efforts involving the top management of the Russian state corporation.

According to the General Staff of the Armed Forces of Ukraine, during the week, there was not a single military object among the targets that Russia chose for cruise missile strikes. The occupiers focused on the destruction of Ukraine’s energy infrastructure. In particular:

On October 21, the occupiers:

On October 24, the Russians destroyed 1,000 tons of wheat in the Berislav district of the Kherson region. As a result of the shelling, a grain silo caught fire. The grain from the previous year’s harvest, sunflower seeds, and agricultural machinery was destroyed by the fire.

On October 25, the occupiers

Large-scale fires at infrastructure and industrial facilities lead to air poisoning with hazardous substances. Pollutants can be carried by winds over long distances.

Due to Russian aggression, 90% of wind power plants and about 40-50% of solar power plants in Ukraine have been decommissioned. This was reported by the Minister of Energy German Galushchenko. Most renewable energy power plants were located in Southern Ukraine, so they sustained the largest damage. In 2019 and 2020, there was rapid growth in the renewable industry in Ukraine: its share in the energy mix of Ukraine reached approximately 10-11%.

According to Ukraine’s State Emergency Service, from February 24 to October 26, 260,096 explosive devices, including 2,143 aircraft bombs, were neutralized in Ukraine. An area of 74,295 hectares was surveyed for explosives.

On October 25, the Russian occupation army used phosphorus shells prohibited by the Geneva Convention in Velyka Novosilka in the Donetsk region. This ammunition not only burns all living things but is also extremely poisonous to the environment.

In the Donetsk region, environmental inspectors calculated over UAH 34 million in damages to the environment due to littering of the land caused by the Russian shelling of 4 utility companies. The buildings in Toretsk, Kostyantynivka, and Siversk suffered significant destruction, which caused large-scale littering of the land with construction and other hazardous waste.

According to the SEI, due to Russian missile attacks on October 18, one of Kyiv’s thermal power plants was damaged. As a result, almost 2,500 square meters of its territory were littered with the destruction waste. The amount of damage to the environment is over UAH 69.5 million.

According to the Ministry of Agrarian Policy and Food, due to the Russian military invasion, Ukraine became one of the world leaders in the contamination of the territory with explosive objects: since 2014, 150,000-180,000 sq. km. have been affected, which is 25-30% of the entire territory of the country. It will take 10 million person-days, or about ten years, to completely demine and clear the territory. According to preliminary estimates, the total cost of the work will be about 2 billion euros. Agricultural lands are contaminated with improvised ammunition, cluster shells, anti-personnel, and anti-tank mines.

The agency has launched a special portal military.feodal.online to record reports of discovered ammunition on agricultural land in Ukraine. Each farmer can send a message, which is subsequently processed by specialists of the State Emergency Service or certified demining operators financed by international donors.

The Ministry of Agricultural Policy reported that the USA, Italy, Great Britain, Croatia, Finland, the Netherlands, Norway, France, Iceland, Denmark, and other countries are actively supporting Ukraine in demining its territories. Canada can also increase its support for Ukraine and become a leader in global efforts to clear our land of Russian mines and projectiles so that the demining process does not drag on for decades.

In an interview for The Voice of Ukraine, First Deputy Minister of Environmental Protection and Natural Resources of Ukraine Ruslan Grechanyk noted that 16 Ramsar sites with an area of ​​almost 600,000 hectares are currently threatened by destruction. They have the status of wetlands of international importance due to their unique biodiversity. The Great and Small Kuchugury Archipelago wetland, with an area of ​​7,740 hectares, has been liberated, however, due to its close location to the front line, it is still under threat.

8 nature reserves and 10 national natural parks remain occupied, and the habitats of many rare species of plants and animals are in the active hostilities zone threatening their existence. Before the war, hundreds of birds could be observed in the Shatsk National Nature Park in autumn. Still, now there are none of them because Belarus is conducting military exercises, and explosions of rockets and shells can be heard constantly.

Natural ecosystems also suffer from fortification construction, explosions, military transport, fires, etc. Some nature conservation areas are deprived of the opportunity to receive funding. This includes those with a large herd of wild animals, in particular the Askania-Nova Biosphere Reserve, and the Azov-Syvash and Dzharylgach national natural parks.

Since February 24, a shelter for over 60,000 internally displaced persons (IDP) has been organized in nature conservation areas.

Most of the IDPs came from the southeastern regions of Ukraine, particularly from the city of Mariupol. The total number of IDPs was more than 12,000. Employees of the Meotyda national nature park gave them shelter in the premises of the administration building. And, risking their lives, they evacuated people out of Mariupol under shellings.

The Sviati HoryNational Nature Park became a shelter for many IDPs – almost 8,000 people from the cities of Izyum, Severodonetsk, Rubizhne, and others. Together with the Sviatohirsk City Council, volunteers and benefactors, the national park employees helped with accommodation and humanitarian aid to all who needed it.

According to the SEI, on August 28, as a result of the shelling of the Sarny Forestry in the Rivne region, the land was contaminated with chemical substances. In addition, as a result of the forest fire, almost 60 trees were damaged, and during the burning of the forests, a significant amount of pollutants was released into the atmosphere. The damage caused to the environment is more than UAH 2.1 million.

According to the State Agency of Water Resources of Ukraine, hostilities in Ukraine significantly aggravate the problems of sustainable management of water resources. In 8 months of the war, more than 500 water management infrastructure facilities have been destroyed, and the volume of water lost due to damage and destruction of dams and other hydrotechnical structures is 742.2 million cubic meters.

On October 20, in his address to the European Council, the President of Ukraine, Volodymyr Zelenskyy, stated that the Russian invaders were preparing a terrorist attack and called for an international monitoring mission to be sent to the Kakhovka hydroelectric power plant.

According to the President, the units and the dam of the Kakhovka HPP have been mined by Russian terrorists. The dam of the hydroelectric power plant holds about 18 million cubic meters of water. If Russian terrorists blow up this dam, more than 80 settlements, including Kherson, will be in the zone of rapid flooding, and hundreds of thousands of residents of southern Ukraine will be in the danger zone.

The water supply of a large part of southern Ukraine may be destroyed. This Russian terrorist attack could leave the Zaporizhzhia Nuclear Power Plant without water for cooling because the water for ZNPP is taken from the Kakhovka reservoir. Even the operation of the canal, which was built to supply water to Crimea, will be destroyed. The overall destructive environmental, humanitarian, and man-made consequences of such a terrorist attack will reach the scale of a historical catastrophe.

On October 24, due to the shelling, the Karlivka water filter station was again cut off power in the Donetsk region.

Russian troops are attacking infrastructure along the Black and Azov Seas and ships at anchor, polluting water and spreading toxins into the sea.

On October 20, Russian troops launched mortar attacks in the direction of the Ochakiv port, its water area, and the recommended sea routes. On October 24, the occupiers shelled the water zone of the Ochakiv community three times.