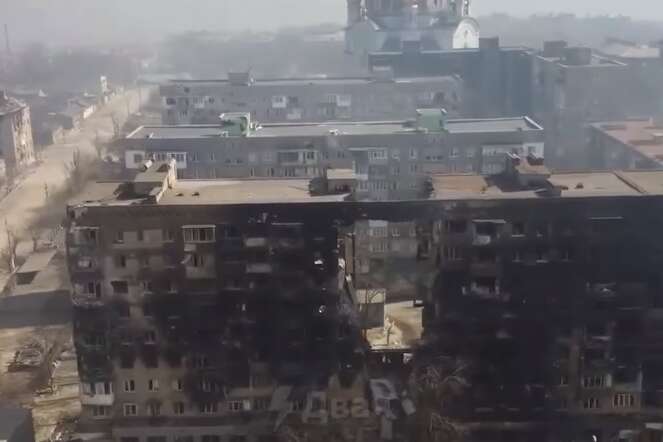 More than 1,500 new graves have been dug at a mass burial site near the southern Ukrainian city of Mariupol, according to an analysis of new satellite images carried out for the BBC.

The site north-west of the city consists of a large field of graves that Ukrainian officials and witnesses say contains thousands of bodies.

Mariupol, a port city close to the border with Russia, was a major strategic target for the Russians. From the start of the war it was pounded relentlessly from the air and from the ground. By the time it fell to the Russians in May, thousands of civilians had died and much of the city had been destroyed.

Recent satellite images from Maxar show that three mass burial sites near Mariupol located at Staryi Krym, Manhush and Vynohradne, have been steadily growing since the Spring.

The Centre for Information Resilience analysed the images of Staryi Krym for the BBC’s Panorama programme and concluded that 1,500 new graves had been dug there since it last analysed images at the site in June. It now estimates that more than 4,600 graves have been dug there since the beginning of the war, although it says it cannot know how many bodies are buried at the site.

Ukrainian officials now believe that at least 25,000 people were killed in the fighting in Mariupol, and that 5,000-7,000 of them died under the rubble after their homes were bombed. Mariupol had a pre-war population of nearly 500,000.

Witnesses in Mariupol have told the BBC that they have seen the Russian authorities removing bodies from the rubble of destroyed buildings in the city over recent months and taking them away for burial.

Olga Sagirova’s harrowing story is a glimpse into what so many in Mariupol went through. She was the only person inside her house to survive when it was bombed by the Russians. Her husband and parents were killed, and like many who have now escaped the city, she doesn’t know where their bodies are.

The 48-year-old accountant lived with her husband Valery in a two-storey house with a landscaped garden, in a residential neighbourhood of Mariupol. Her two adult children lived elsewhere.

It had been fairly quiet in her area in early March, despite the intense shelling in other parts of the city. Nonetheless, each night she and her husband would sleep in the cellar. “I used to cry all the time, my husband tried to reassure me,” said Olga. “He said I shouldn’t worry, that we’d get through this.”

On the evening of 10 March, the 15th day of the Russian bombardment, there was a knock at the door. Olga’s parents, who were in their 80s, were standing there looking very shaken.

Their house had just been shelled and was on fire. Olga brought them in and urged them to sleep down in her cellar with her. But they didn’t want to, so she gave them a bedroom in the main house.

At about 22:30 Valery went upstairs from the cellar because the shelling had quietened down and he wanted to get some rest. But he reassured Olga, saying he would return if anything happened.

At 03:30 she woke up and heard the sound of a plane. Suddenly the entire house came down on top of her.

“It just all happened in a split second. Everything was falling down on me,” she said.

“My legs were half-buried, so I couldn’t even move. When my hearing slowly returned, I could hear my husband’s voice somewhere: ‘Olga, help me, dig me out,’ he said. ‘I’m near the stairs’.”

Olga could see Valery only six feet away but she could not reach him. He was buried more deeply than her.

All she could do was to keep talking with him. “After a while, I heard him wheezing,” she said. “Then he was silent.”

Alone in the darkness, Olga tried to scream but no-one heard her. Eventually, she saw a torch moving towards her. It was her neighbours, who tried to free her from the rubble. Unable to do so, they said they would return at sunrise.

Olga was alone again, with her husband, who had spoken his last words, buried in the rubble near her.

Hours under the rubble

As dawn broke, Olga began to make out her surroundings. When she looked up she saw a concrete slab – tilted and threatening to fall on her.

“I knew that nothing mattered any more. I was dying,” she says. At that point, she says, she tried to take her own life.

Eventually her neighbours came back with others and they tried to dig her out. They managed to dislodge one of Olga’s legs. But one of the concrete slabs was pressing down on the other one.

For six more agonising hours they tried to free her right leg. Finally they decided to wrap a cable around Olga’s leg and pull it hard.

“I was really scared that they couldn’t get my leg out and I would be left without a leg,” she says.

After three attempts, Olga was freed. Both of her legs were broken in multiple places and she was unable to walk for almost five months. “My right leg was totally smashed,” she said.

That night Olga lost not only her husband, but her parents, who had been sleeping in the main area of the house when it was pulverised.

But her ordeal was not over yet.

While Olga was being cared for in a nearby cellar in Mariupol she received more devastating news.

Her sister and brother-in-law had also been killed in their home three days earlier.

“They were sitting in their garden drinking coffee when the bomb struck,” Olga said.

“I lost five of my closest people in a few days.”

When I met Olga, she was living in Huizen near Amsterdam, safe with her two grown-up children. She can now walk again, after months of needing to use a wheelchair.

She is learning English and loves to walk and look at the flowers and gardens that remind her of home.

She is a warm, elegant and softly spoken woman with a deeply friendly smile. Olga told me she is glad to be alive and believes she was fated to live.

When I texted her the other day to wish her a happy birthday, she replied: “No matter what, life goes on and I have an understanding that I must live!”

She had spent much of the day in tears.

Until mid-summer she had forced herself to stay awake until the early hours of the morning to stave off the nightmares in which she relived the horror. She scrolls endlessly through pictures of her former life and says she has not yet fully absorbed what has happened to her.

In her two adult children she sees her husband. She misses Valery so deeply that she can hardly bear it. They used to swim together, have parties once a week, and now Olga lives in a small flat in a foreign country.

Olga has been unable to get information about the bodies of her family, but suspects they are still buried beneath the rubble of her house.

Russians are in control of the city now, but Olga was told this summer that one body could be seen stuck in the ruins of her old home.

Olga is just one of many people from Mariupol who cannot find the bodies of their missing relatives.

Some were buried in mass graves in the centre of Mariupol, dug by Ukrainians who braved the shelling to retrieve corpses that were lying in the streets and in homes.

In early March, Vaagn Mnatsakanian, a local ecologist, had been trying to find a place to bury his father who had been killed in the fighting. Vaagn found to his disgust that the mortuaries were full.

He went to the local authorities to ask where he could bury his father and – realising how many others were in the same situation – volunteered to start organising emergency burials.

He began to arrange teams of other locals to dig three mass grave sites in the centre of the city for the Ukrainian municipal authorities. For five days in March he and his team collected bodies from around Mariupol, under intense shelling.

The bodies were hurriedly slid into the trenches, often without body bags. “On some terrible days we were told there were over 100 bodies – sometimes 150 bodies – that needed collecting that day,” he said. “There were so many that we couldn’t collect them all.

“One day a shell flew towards me and I had to jump into the mass grave for cover. I found myself near the corpses, but I was glad to be alive,” said Vaagn.

Searching for my son

Tatyana, who lost her son in the fighting, had been desperate to find him and this summer visited a mass burial site at Vynohradne near Mariupol looking for him.

She says she doesn’t know what happened to 26-year-old Yaroslav, who loved cars and dreamed of owning his own business.

But she says she was told that he was killed by a sniper.

“If he is not alive, we want to bury him humanely,” she said.

“We counted over 800 fresh graves [at Vynohradne],” said Tatyana, who prefers not to use her surname. Many people from the Russian-controlled city do not want to speak openly about mass burials, for fear of reprisals by the new authorities.

She took a photograph of the site at Vynohradne. Many graves at the site are marked with small placards bearing numbers and gender, but not names. “Most of the bodies are unidentified,” she said.

Others the BBC spoke to visited makeshift mortuaries in Mariupol to try to find their loved ones this summer, and had to look through scores of bodies lying outside on the ground unrefrigerated.

“People should know the truth about these horrors,” said Tatyana, “so that it will never happen again”.