Reconstruction of the Kerch bridge. According to British intelligence 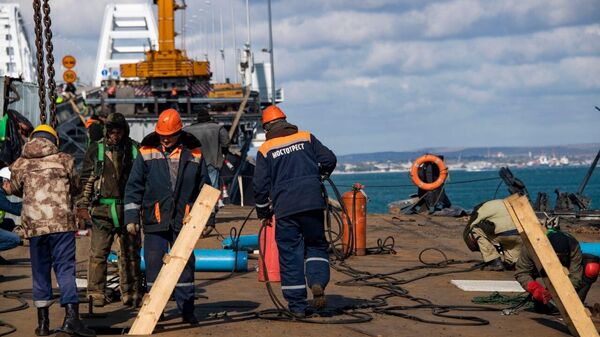 The UK Ministry of Defence is devoting its usual morning briefing to the progress of repairs to the Kerch Bridge, which was destroyed by an explosion on October 8th, the origin of which is still unknown.

Russia is still repairing the Kerch Bridge, but it will not be completely operational until at least September 2023.

The bridge was closed on November 8th to allow for the installation of a 64-metre long span. To rebuild all of the damaged parts of the road, three additional spans will be required.

Although Crimean officials have stated that construction on this segment of the bridge should be completed by the 20th of December, a report submitted to President Putin states that repairs to the other lane would cause traffic congestion.

The contract calls for the replacement of portions of the damaged railway bridge to be finished by September 2023, but Russia’s deputy prime minister has stated that the repair timeline would be reduced.

Although one lane is available, train traffic is still restricted. The speed of restoration operations will be strongly influenced by winter weather conditions.

The Kerch Bridge attack hindered Russian logistics and supplies to seize Crimea and southern Ukraine, reducing Russia’s ability to deploy military equipment and personnel there by train or road.

The bridge damage, the recent attack on the Black Sea Fleet at Sevastopol, and the likely departure of Russian soldiers from Kherson all cast a pall on the picture of military triumphs.