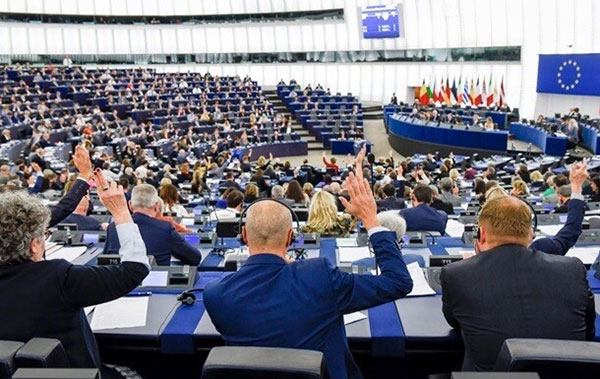 In response to the attacks by the Russian forces on Ukrainian nuclear power plants, the international community should take action to at least suspend Russia’s membership in the UN Security Council.

This was stated by a number of members of European Parliament in their comments to Guildhall, Ukrinform reports.

Member of the European Parliament from Lithuania Petras Auštrevičius has called the Russian missile barrages, which led to two nuclear power plants being disconnected from the power grid, acts of nuclear terrorism, based on which Russia should be excluded from the UN Security Council.

“IAEA confirmed two nuclear power plants blackout after Russian strikes is just another proof that Russia uses nuclear terrorism in the course of its aggression. Besides other types of terrorism – military, information and others. There are very few people around me who still doubt to assess this very serious situation that is taking shape. Responding to such actions more strong, more systematic sanctions are needed to undermine Russian state financial capabilities, in particular access to global financial institutions. We have what to do, it is a matter of political will, terrorists won’t change, they go to the end, so we must act,” said the MEP.

“Russia should have been expelled from the UN Security Council and from the UN as a whole for a treacherous violation of all the principles of the work of the UN and the norms of international law long time ago. These actions are nuclear terrorism, we must use them to try to exclude or at least suspend Russia’s membership in the UN Security Council,” added the lawmaker.

Member of the European Parliament from the Czech Republic, Tomas Zdechovsky, also believes it necessary to work toward at least suspending Russia’s membership in the UN Security Council.

“It is absolutely necessary to get specific to a nuclear situation caused by Russia. This is absolutely unacceptable behavior, I will address both our Prime Minister (Czech Republic ed.) and politicians, as it is necessary to give a specific response to Russia. And, yes, we absolutely have to make efforts to at least to suspend Russia’s membership in the UN Security Council,” Zdechovsky said.

German MEP Serhey Lagodinsky spoke of a threat emerging from NPP blackouts, for which he believes Russia is responsible.

“What we see now (nuclear power plants blackout – ed.) is a logical, from their point of view, continuation of this terror, which hasn’t stopped, and now concerns nuclear energy (…). There is a blackout, there is a lack of cooling, and there is a serious threat for which the Russian side naturally bears responsibility,” he summed up.