Russia is losing allies: Kazakhstan and Uzbekistan have abandoned the gas union 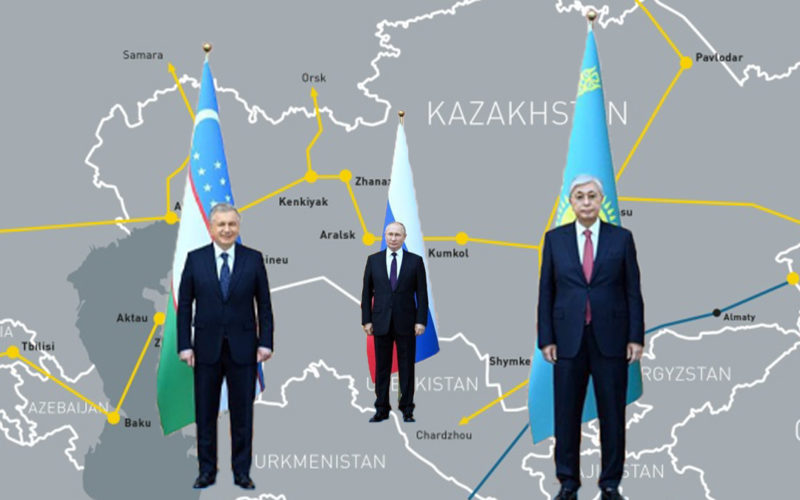 According to RUSSIAVSWORLD, recently appointed Deputy Prime Minister for the Development of Fuel, Energy and Chemical Industries – Minister of Energy of the Republic of Uzbekistan Zhurabek Mirzamakhmudov said in an interview with Kun.uz that his country does not intend to support the creation of a “triple gas union” between Russia, Kazakhstan, and Uzbekistan.

He specified that the country would not accept the political requirements of such an agreement, especially if they contradicted the country’s national interests. In turn, Uzbekistan is ready to develop cooperation based only on a commercial sale contract.

The minister said that Uzbekistan only faces an acute gas shortage in the cold season, and the country is entirely self-sufficient the rest of the time.

The initiative to create a “triple gas union” comes from Russian President Vladimir Putin. It became known on November 28 during the meeting of President of Kazakhstan Kassym-Jomart Tokayev with Russian Prime Minister Mikhail Mishustin.

In turn, Kazakh Foreign Minister Roman Vasilenko explained on November 30 that it is too early to discuss the content of the gas union between Russia, Kazakhstan, and Uzbekistan; experts should carefully study the idea.

“It is too early to discuss its (the gas union) content because it is still an idea. You have probably heard the President’s comment that this idea should be carefully studied; it is still just an idea. In diplomacy, many ideas are voiced, so they deserve close attention from experts before a particular state decision is made,” said Foreign Minister of Kazakhstan Roman Vasilenko.

Such caution of Kazakhstan is instead forced rather than excessive. There are cases when Moscow, wishing to curb its closest ally after Belarus, stopped the work of the Caspian main oil pipeline, which carries 80% of Kazakh oil exports to its leading buyer – the EU. The oil and gas sector must provide more than 40% of the Kazakh budget revenues.

Most of the pipeline is located on the territory of the Russian Federation. The latter is the main shareholder of its management company – the Caspian Pipeline Consortium (D.U. PJSC “Transneft” 24%). The share of Kazakhstan in the company is 19% (JSC National Company “KazMunayGas”)

On July 4, Kazakhstan, one of Europe’s five largest oil suppliers, expressed its readiness to help the E.U. overcome oil and gas shortages. President Kassym-Jomart Tokayev, in a telephone conversation with E.U. President Charles Michel, said that Kazakhstan “is ready to use its hydrocarbon potential to stabilize the situation on the world and European markets.”

The next day, Russia threatened to temporarily stop the export of Kazakh oil through the port in Novorossiysk, citing problems with documentation at the enterprise. On July 5, 2022, the Primorsky District Court of Novorossiysk ordered the Caspian Pipeline Consortium (CPC) to suspend its activities for 30 days due to violations in the Oil Spill Response Plan, the company’s press service reported.

In addition, on July 6, an accident occurred at the Kazakh field Tengiz – the largest of those from which supplies from Kazakhstan through the CPC. The pipe explosion killed two workers and injured three others.

On July 7, Kassym-Jomart Tokayev announced the need to diversify oil supply routes from Kazakhstan. On July 11, the Krasnodar Regional Court changed the district court’s decision, imposing an administrative fine of 200,000 rubles on the CPC. After that, oil transit resumed.

On the night of August 2, an entry appeared on the page of the Deputy Chairman of the Security Council of the Russian Federation, Dmitry Medvedev, on the social network “VKontakte,” in which Kazakhstan is called an “artificial state” and a former Russian territory, whose authorities resettle various ethnic groups, which “can be classified as genocide of Russians.”

“We do not intend to turn a blind eye to this. Until Russians come there, there will be no order”, – the author writes. After 10 minutes, this post was deleted; later, Medvedev’s aide said that the former President’s page was hacked, but Ksenia Sobchak saved a screenshot of the letter.

In Kazakhstan, many people took this record seriously. Such a harsh reaction from Russia is justified for other reasons. Kazakhstan is among 35 states that abstained during the U.N. General Assembly vote on the resolution condemning Russia’s military actions in Ukraine. The country adheres to anti-Russian sanctions, does not recognize “DPR” and “LPR,” and cancels the May 9 parade.

As for Uzbekistan, the country is in solidarity with Kazakhstan in condemning Russia’s aggression against Ukraine, also does not recognize the “DPR” and “LPR,” and the annexation of the Crimean peninsula to the Russian Federation in 2014.

But let’s analyze the decisions of the countries. We can come to the disappointing conclusion that a more pragmatic calculation is implied.

Being bypassed in international politics, Kazakhstan and Uzbekistan understand that rapprochement with the Kremlin will sooner or later lead to international isolation and sanctions, as it did Belarus. In addition, Moscow will interfere in internal affairs and, in case of opposition – will blackmail with the termination of transit.

The “triple gas union” with a “big money bag” can also lead to the Russians’ takeover of national oil and gas companies. But it is impossible to stop cooperation, as Russia is the leading transit country for raw materials and the main trade and economic partner.

It should be expected that in the future, Kazakhstan and Uzbekistan will continue to negotiate with the Russian Federation. Still, it will not lead to a regional alliance.