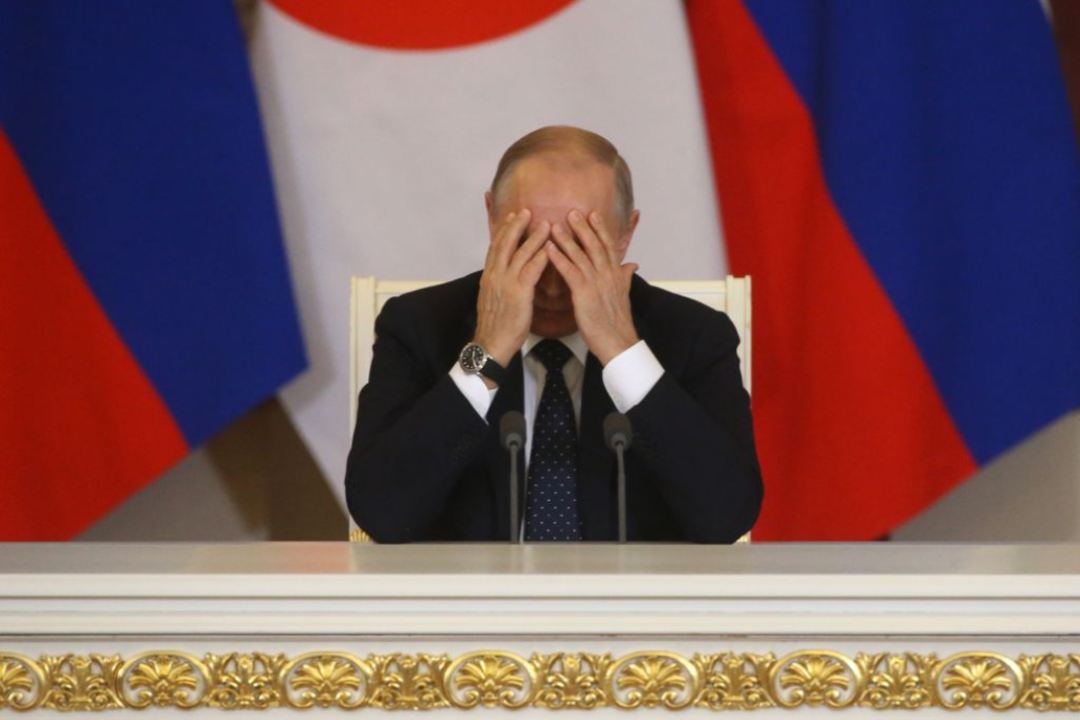 According to InsightNews: Russia’s all-out war against Ukraine, and successful defense and counter-offensive by the Ukrainian army, have radically changed the geopolitical landscape in the world.

In March, the first weeks after Russia launched an invasion, Ukraine sought to achieve at least some security guarantees. But now it’s the Russian dictator Putin who is thinking about guarantees.

However, after the war crimes committed by the invading Russian forces, there are more chances that Putin and Russian military leadership will face an international tribunal.

For almost ten months of active war, Russia has suffered irreparable losses. Its army was partly destroyed, and elite units were demolished trying to capture Kyiv. To replace them, Russian leadership recruited inexperienced, mobilized men and prisoners. Moreover, Russian soldiers sent to the frontlines are forced to fight not with old weapons and poor equipment. So, what are the chances of signing a peace deal on Ukraine’s terms and the Russian ones?

Development on the battlefield defines the course of peace talks

The war against Ukraine has destroyed the myth of the “second army of the world” that Russian leadership had attributed to their army. And now, the Western economic sanctions are slowly destroying the Russian economy and condemning several generations of Russians to poverty.

Russian missile terror attacks on Ukrainian energy infrastructure have failed. Moscow’s terrorist tactics only increased the support of Ukraine in the world.

Russia has become a pariah in geopolitics. And an awkward partner for some states, like China, who fails to condemn Moscow for the war. This was evidenced by the G20 summit, which in Ukraine was aptly called G19.

This event became a place of total condemnation of Russia and Putin’s regime. The British Prime Minister Rishi Sunak destroyed Russia’s behavior in his article in The Telegraph.

“Real leaders take responsibility. They do not hide. However, one seat will remain vacant at the G20 summit in Indonesia this week. The man responsible for the bloodshed in Ukraine and economic problems worldwide will not be there and will not meet face-to-face with his colleagues. He will not even try to explain his actions. Instead, he will stay at home while the current problems will be solved by everyone else”, – Rishi Sunak declared.

For a long time, no one even considered concluding a conditional “Minsk-3” accords between Russia and Ukraine. The situation is radically different, Ukraine is winning on the battlefield, and Putin has no allies in Europe, except weak attempts by Hungary and Serbia to block support to Ukraine to sanctions against Russia.

The most important thing is that Ukraine is no longer an object of politics, as in 2015 when Minsk-2 agreements were signed to stop the war in Donbas. Now Ukraine is a full-fledged actor, deciding when and on what conditions any peace talks could start.

“When someone wants to negotiate, he does not do so. Do negotiations help to overcome terror? We must all honestly answer this question. Terrorists are neutralized”, – Volodymyr Zelensky emphasized in the Financial Times, referring to Russian massive missile attacks on Ukrainian civil infrastructure.

Read also: ​​Why are talks with Russia impossible, and more support for Ukraine is needed?

Ukraine wants a return of Donbas and Crimea, occupied by Russians

Zelenskyy also stressed in an interview with the FT that he refuses to even theoretically discuss any outcome of the war that does not involve the return of Crimea to Ukraine’s control – militarily or diplomatically.

In this situation, the ruling regime in Russia is panicking, looking for ways out of the deadlock and trying to arrange at least some “negotiations.” The Russians’ plan is simple – to try to destroy energy infrastructure even more during the winter and force Ukraine to peace talks. Russian military actions are backed by disinformation and propaganda campaigns run by puppet media, Kremlin agents, and useful idiots across the globe.

Ukrainians want the liberation of all occupied territories – poll

However, this plan is deemed to fail. Ukrainians do not want to hear about negotiations without further “gestures of goodwill” from Russia. Kyiv wants the liberation of all occupied territories of Ukraine within the borders of 1991 and the change of power in the Kremlin. The “collective West” or “Ukraine’s partners” demonstrates unexpected strength, unity, and consistency of the strategy that Ukraine should not lose and win.

According to opinion polls conducted in Ukraine this summer, the overwhelming majority of Ukrainians believe that a fair outcome of the war would be the return of all territories to Kyiv’s control within the 1991 borders, including Donbas and Crimea.

The poll, conducted by KIIS on October 21-23 (after the Russian army had already started the large-scale bombing of Ukrainian energy infrastructure), showed that 86% of Ukrainians believe that it is necessary to continue armed resistance to Russian aggression, even though it will lead to new shelling of Ukrainian cities.

To bombardments of energy infrastructure, Ukraine responded by hitting distant airfields in Russia

But Russian terror attacks didn’t remain unpunished. After the Ukrainian attacks on distant Russian strategic airfields, it became clear that Ukraine could severely harm the Russian regime far behind the frontlines. A few weeks before, the European Parliament recognized the Russian regime as a terrorist and demanded the establishment of a special tribunal for war criminals from Russia.

It also lifted the taboo on the discussion of arming Ukrainians with modern tanks, aircraft, and UAVs, as well as Patriot anti-missile systems and ATACMS long-range missiles. Sooner or later, Ukraine will receive all the required weapons, and the invaders’ days in Ukraine will be counted.

For comparison, before the Russian invasion, the West thought only about defensive and guerrilla weapons and readiness to accept refugees.

Russia has driven itself into a dead end

Russia, after a series of defeats and the publication of numerous facts of war crimes that have acquired the character of a planned genocide, has driven itself into a dead end. The declaration of the annexation of Ukrainian territories amid the fighting, which Russia did not fully control. And weeks after, the Russians were forced to flee from Kherson, the only regional center they managed to capture since the beginning of the invasion. And this further complicated the situation of the Russian regime.

If earlier Western analysts could consider the occupied Crimea to be a specific “red line,” since this territory declared by the Russians as their own was supposedly under the protection of Putin’s “nuclear umbrella,” the withdrawal from Kherson, very close to the peninsula, showed that the king is naked.

Moreover, now there is a situation where Russia has no clearly defined and recognized borders, even in its state propaganda. And this is typical for a fading empire with a long history of territorial losses and claims.

After severe defeats in the Kyiv region, the Kharkiv region, Lyman, and Kherson, the Russians, reinforced by thousands of convicts, were in prisons yet in September, trying in vain to capture at least the town of Bakhmut. But even there, the tenacity of the Ukrainian Armed Forces stopped invaders.

In this situation, each subsequent step of the Russians only worsens the position, which has long been a losing one. Russia has repeatedly said that it will not give up Crimea and then Donetsk, Luhansk, Zaporizhzhia, and Kherson regions, but it is simply incapable of keeping and controlling them.

Are security guarantees for Putin a realistic scenario?

What remains for Russia and its leadership? Only loss and attempt to get some security guarantees. Such a way out might be being bargained behind the scenes.

One of the options to save face for the Russian dictator was proposed by French President Macron, who is forced to conduct telephone talks with Putin. Macron spoke about certain guarantees for Russia and personally for Putin. However, this position was severely criticized by the EU countries.

This topic will be part of the agenda for peace talks, so we need to prepare to hear about it and seek ways to give guarantees to Russia the day it comes back to the negotiating table. That means one of the main things we have to address, as President Putin has always said, is the fear of NATO coming to his door and deploying weapons that could threaten Russia, – Macron discusses guarantees for the aggressor state in an interview with TF1 in December.

Macron’s statement did not contain any specifics, but it had considerable resonance, which means that it achieved its goal – it started a discussion. The main thing is that it is in the right direction, namely, the talk of the conditions of Russia’s surrender.

The US President Biden’s statement during a joint press conference with Macron confirms this logic. Mr. Biden said the United States would approve peace talks, but on the condition that Russia demonstrates its interest in ending the war and not getting a “pause” to mobilize Russians again and assemble new missiles with foreign microchips bought in illegal ways.

In early December, Putin also spoke with German Chancellor Olaf Scholz. The Russian dictator complained that the weapons assistance provided by the West to Ukraine “leads to the fact that Kyiv completely rejects the idea of any negotiations.” Scholz, in response, called on Putin to find a diplomatic solution to the conflict, which “would include the withdrawal of Russian troops” from Ukraine.

Russia has no way out but to withdraw from Ukraine

These are not conditions of peace but Russia’s withdrawal from Ukraine in its internationally recognized borders. Vladimir Putin may be busy reviewing his last options so for the first time in 10 years he canceled his traditionally large press conference, address to the State Duma, and New Year’s banquet in the Kremlin.

There are already reports in the media about the plans of the Russian elite to flee to the countries run by their allied dictators or South America. Indeed, some war criminals found shelter there at one time and even got a chance for a second life.

Read more: Russia collapse or coup against Putin: what scenario is more likely?

His rule will be stopped as his influence in the world has vanished. With propaganda and fake news channels banned in the West and not enough money for agents and useful idiot activities, the support of Russia in the world has almost disappeared. Indeed, seeing massacres committed in Ukraine, Irpin, Bucha, Borodyanka, Izyum, Kherson, and the deliberate destruction of civilian infrastructure, the state leaders do not even envisage standing next to the war criminals.

The final way for Russia to start peace negotiations is to withdraw from Ukraine now with some guarantees for those willing to negotiate. Otherwise, even in the spring, no one will be ready to discuss any warranties with anyone from the Russian military and political leadership. And everyone involved in the war against Ukraine will be held responsible.