Ex-US Army man who switched sides & is now working for the propaganda ministry of Russia. 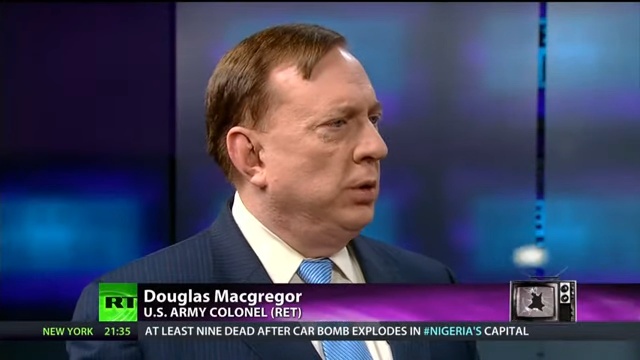 His name is Douglas Macgregor and he’s one of the well-known commentators on the Russo-Ukrainian War, making predictions that never come true.

First, let’s give credit where credit is due: he was a great war commander during the 90’s. His risky “blitzkrieg” style tactic led to some great victories in the Gulf War, and journalist Thomas E. Ricks described him as “one of the Army’s leading thinkers on innovation”.

His book “Breaking the Phalanx” called for a total overhaul of US army tactics and the head of Army US General Dennis Reimer passed copies of the book to other generals. His other book, “Transformation under Fire”, was required reading for all officers in the Israeli Army.

But his unconventional thinking probably hindered his chances for promotion & eventually he was sidelined. In 1997 US Army refused him for the 3rd time for a position of combat brigade commander – basically a death warrant for his Army career. In 2004 he left the Army.

Macgregor was one of the top planners in the 1999 attack and bombing on Serbia – a fact many vatniks (who usually also support Serbia) often fail to mention.
He later said that the US “put, essentially, a Muslim drug mafia in charge of that country.”

Between 2017 and early 2022, Macgregor has appeared on Tucker Carlson’s show 48 times (and many times since). Carlson has described him as a “one of the people we trust to give us real information.”

You really can’t make this shit up.

Macgregor’s capability to lie with a straight face was probably why Trump got so interested in him. When it comes to the war in Ukraine, Macgregor is a pathological liar. His predictions are similar to Jehova’s witnesses predictions: they never come true. Three days after the invasion begun, he predicted that “If they don’t surrender in the next 24 hours, I suspect Russia will ultimately annihilate them.” He also said that “US should stay out of the conflict” and “avoid sending any aid to Ukrainian forces”.

A few days later he said that “Russia has been too gentle” & that “I would say another 10 days this should be completely over.” He’s also called Zelenskyy a puppet and called for Ukraine’s neutralization. After these comments, Tucker Carlson described him as an “honest man”.

In March, Ukrainians were, based on Macgregor, losing again: “grounded to bits. There’s no question about that despite what we report on our mainstream media.” In an interview by the Grayzone, he said that Putin is taking good care of civilians and this delays his victory.

In Sep, 2022, he again told Carlson that “this war may be over soon” and that “the Ukrainian army is bled white, tens of thousands of Ukrainian troops have been killed or wounded. Ukraine is really on the ropes”. This was a few months before Russian troops fled from Kherson.

In Nov, 2022, he said that there are 540 000 Russian troops stationed at the outskirts of Ukraine preparing for a major, “war ending” offensive. 1000 rocket artillery systems and at least 1500 tanks. I guess these troops are still waiting for the right time for the attack.

Macgregor has also been accused of Anti-Semitism, calling Jews “rootless cosmopolitans” (old Russian pejorative epithet) and racism (he said that Mexican immigrants should be shot at the border; he also referred to blacks to as an “entitled underclass”).

As we all know, Russia LOVES to use any media of US origin as a propaganda, both in their own country and elsewhere. Macgregor, along with Carlson, are providing endless amounts of propaganda material for them.

You can see this on fake news blogs, on Twitter, on FB: Macgregor’s and Carlson’s interviews and soundbites are one of the most used form of propaganda and disinformation: