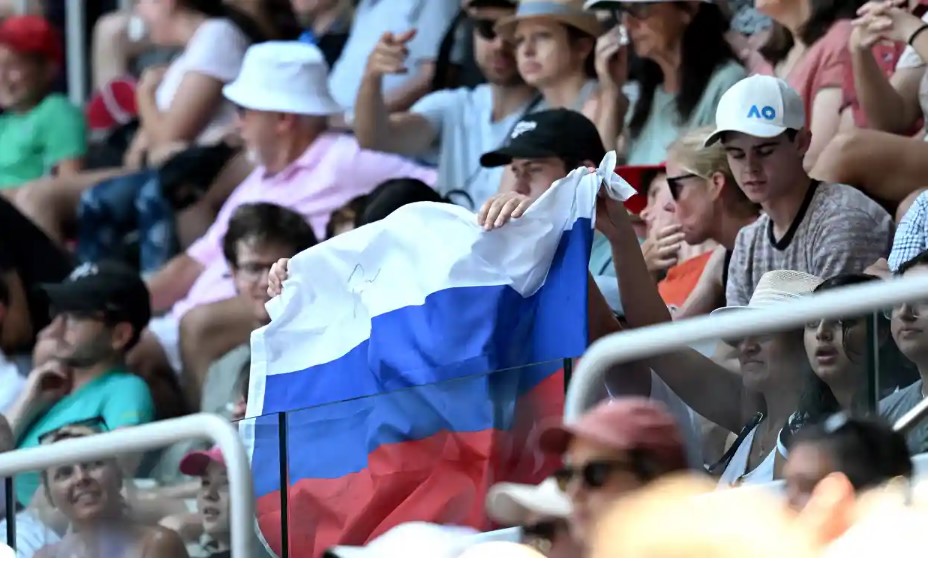 Tennis fans have been spotted hoisting a Russian flag at the Australian Open despite a ban introduced by Tennis Australia earlier on Tuesday in response to strong criticism from the Ukrainian ambassador.

As in many other sports, Russian and Belarusian tennis players are competing under a neutral banner at this year’s tournament due to the ongoing invasion of Ukraine. Fans had initially been allowed to show their support for players from both countries, but not in a way that “could cause disruption”, according to TA.

A Russian flag was visible in the crowd during Kamilla Rakhimova’s first-round match against Ukraine’s Kateryna Baindl on Monday, prompting calls from Ukraine’s ambassador to Australia and New Zealand for action to be taken.

TA on Tuesday confirmed a policy reversal that banned flags from Russia and Belarus anywhere at Melbourne Park for the rest of the year’s first grand slam.

Yet the red, white and blue of a Russian flag could been seen in the stands of John Cain Arena during Tuesday’s match between Russian fifth seed Andrey Rublev and Austrian Dominic Thiem.

Tennis Australia confirmed to Guardian Australia that a banned flag was waved by spectators during a match at the John Cain Arena on Tuesday. “The patrons were spoken to by security and the flag was removed,” a TA spokesperson said.

In its earlier statement on Tuesday announcing the policy reversal, TA said its “initial policy was that fans could bring them in but could not use them to cause disruption”. “Yesterday we had an incident where a flag was placed courtside. The ban is effective immediately. We will continue to work with the players and our fans to ensure the best possible environment to enjoy the tennis.”

Baindl won her opener against Rakhimova 7-5, 6-7 (10), 6-1 on the outer court 14 at Melbourne Park, where the Russian flag could clearly be seen hanging on a fence. The Ukrainian ambassador, Vasyl Myroshnychenko, said he strongly condemned the gesture.

Aryna Sabalenka, the fifth seeded Belarusian, was asked about the situation after she began her campaign with a straight-sets win over Czech Tereza Martincova on Tuesday and said she had no control over it.

“I really thought that sport is nothing to do with politics,” Sabalenka said. “But if everyone feels better this way, then it’s OK. No flags, no flags OK. I’m pretty sure they [Ukrainians are] upset about that, and if Tennis Australia made this decision to make them feel better, they did it, I mean, what can I do. I can do nothing.”

Russian and Belarusian players were banned from taking part in last year’s Wimbledon tournament as global sporting sanctions were brought against Russia over its invasion of Ukraine. That decision led to ranking points won by other competitors at the tournament being stripped, and the payers from both countries are free to play this year’s Australian Open, albeit under a white flag.

Putin's friends in senior positions in Germany
All news