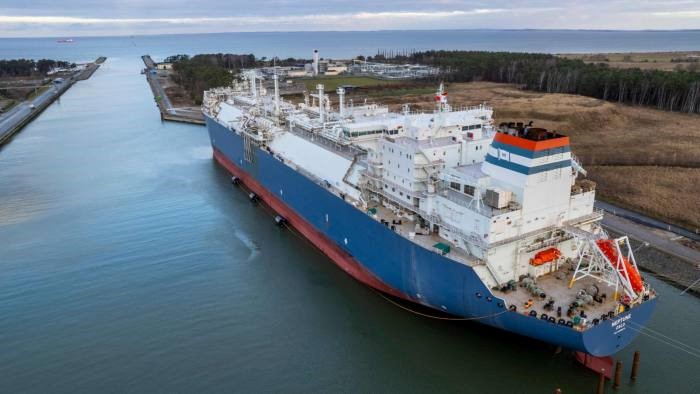 Vladimir Putin’s energy war is suddenly going about as well as his “special military operation”. That is, to say, not very. After causing fear and chaos by weaponising gas supplies to countries backing Ukraine, the Russian president now finds himself very much on the back foot. In the past month, natural gas prices have plummeted. After trading near €150 per megawatt hour ($48 per million British thermal units) at the beginning of December they have fallen below €60/MWh ($19 per mmbtu) this week, helped by a period of unseasonably mild weather that has damped heating demand. The prices remain high by historical standards. Household bills are still undoubtedly painful, and industry has taken a blow. But gas is back to a level that is just about manageable for most western European economies to shoulder. Prices are about twice the level we once would have considered on the high side in a normal winter, but are no longer 10 times that, as they were last summer when Russia’s fully cut off its main gas pipeline to Europe. Widespread shortages, which were once legitimately feared, have not materialised. Instead, Europe’s gas storage facilities — the key measure of the continent’s ability to comfortably get through this winter and next — are brimming for the time of year. Normally, by this point in winter, you’d expect storage levels to be down to about 60 per cent or less of capacity. Instead, they still stand at almost 80 per cent, with levels in Europe’s largest economy, Germany, closer to 90 per cent.

It may not necessarily be wise to cheer the springlike temperatures in many European countries over the Christmas period, given what that tells us about a changing climate. But you can forgive a wry smile from those who know enough Russian history to find it amusing that General Winter appears to have defected to back the countries supporting Ukraine. There are still concerns about what happens next. A prolonged cold snap in February or March could still start to draw down European storage, though the weather forecasts, for now, look reasonably benign. It is possible that Russia will move to cut the small amount of pipeline gas still reaching Europe through Ukraine and Turkey. But most industry predictions are now for the spring and summer gas storage refill season to start from a high base — calming fears that winter 2023/24 could be a bigger challenge given the much lower Russian flows compared with the first half of last year. Europe is better positioned now to handle any further Russian cuts. A different threat is what happens to Chinese demand after it emerges from its Covid-19 lockdown policies. Right now, Chinese gas storage tanks are largely full after a period of depressed growth. But later this year, the industry broadly expects Chinese demand for imported liquefied natural gas — the same seaborne cargoes Europe has been relying on in large part to replace Russian flows — to pick up. That may not be an immediate issue if Europe is starting to refill storage from a high base this spring. But things could still be a bit tighter than is comfortable when winter 2023/24 starts if Chinese demand roars back.

So it would be foolish to rule out further price volatility. But Russia’s weaponised energy strategy is really on borrowed time. Last year, for Moscow higher gas prices more than offset the loss of volumes sold. That looks unlikely to be replicated. Western sanctions have also effectively halved the price Moscow can get for its oil, hitting the Kremlin’s budget. By 2024/25, more LNG will start arriving on to the global market, easing the supply situation and making extreme price spikes much less likely. While prices may not fully retreat to the average of the last decade, the forward curve is no longer predicting a return to the prices that threatened a deep and prolonged recession in Europe. None of this suggests Europe can afford complacency. Analysts are hesitantly flagging that the one small risk to Europe’s gas balance in the coming months could be industrial demand picking up. The commitments made to expand renewable power and other sources of clean energy generation still need to be accelerated to remove the strategic weakness exploited by Putin. Governments such as Germany’s have shown they can move quickly in a crisis, establishing floating LNG terminals in a matter of months to open up alternatives to Russian gas. The same urgency now needs to be applied to longer-term solutions, be that offshore wind, hydrogen or nuclear, while speeding up the long-term process of reducing the use of gas in heating. That will be the only way to decisively declare victory in the energy war.